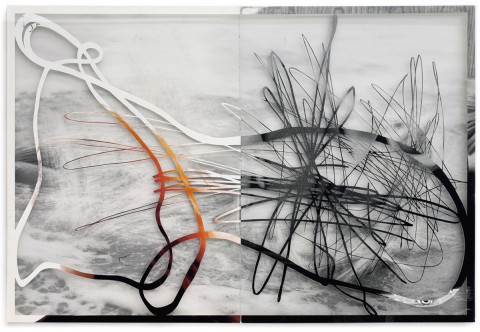 I live in a wild and exceptional manner,
which suits me greatly, without an event or sound.
This is objective, complete nothingness.

Peter Freitag works with pre-existing motifs taken from advertising, magazines or art catalogues. Using these items to create unique units of being, his conceptual approach does not present a shallow criticism of these works; instead he opens a deconstructivisitc dialogue with their pictorial language.

Although his technique and conceptual starting-point fascinate, it is the picture spaces that he creates which have established Peter Freitag's virtuoso status. Working with the exactness of a detective, he dissects his material, rearranging and unleashing it to expose previously undiscovered coherencies which lend themselves to a multitude of interpretations. In some of his works, the original information carriers disappear almost completely from view. The subtleness of the void is suddenly accorded a solo role, acting as an empty projection surface which abandons itself to the moment of viewing. In doing so, the artist opens a range of new vistas which unfold unchecked. True to the original sensual meaning of "retouching", Freitag's work seeks to quote its action: re-touching not to obscure, but to reveal that which was previously hidden.